Indian culture is extremely elaborate, yet very simple in essence. Indic civilisation, from ancient times and through the course of history, has developed an intricate understanding of the universe, the world and the relationship of man to these. The culture is therefore an ethos well implemented into everyday living – a practical and participative guide to live life in harmony with the various agents and forces that mould existence. This has given rise to religions that are also ways of life. All acts, even seemingly ephemeral or routine things such as waking up, ablutions, greeting people are all part of an extremely well designed system to keep man in tune with a greater cosmic order. Deities in Indian religious traditions, existing in millions, are considered as living beings, manifestations of energy in a particular form and character; ultimately all of them sparks of a supreme and absolute ‘God’. Offering food to those deities is thus part of a well established practice rooted in several ideas and realisations.

The food that is offered is called NAIVEDYAM. Technically the term Naivedyam encompasses all offerings, but it is most commonly used to denote food offerings. So, all food offerings, be they savoury, sweet or in beverage form brought to the temple or offered in one’s personal shrine room are called Naivedyam.

There is a profound spiritual science behind offering food. Hindu traditions propound that deities do not physically partake of the food, but rather absorb the ‘Praana’ (vital life force) of the items the food offering is made of. At Puja time, when the deity is invoked, specific rituals are done to transfer that Praana to the deity as it hovers around the Murthi (consecrated image of a deity) in astral form. One can easily recognise this part of a generic ritual set up by hearing the priest chant ‘Praanaya svaha, apaanaya svaha…etc ending with naivedyam nivedayami. This offering along with other parts of the ritual generate shakti, which is radiated back to everyone as blessings. The saanidyam or spiritual energy of the Murthi through which the deity is invoked, is also strengthened through the offering of specific elements. Thus, natural ingredients are used so as to bring about particular types of ‘Praana’. This is why a lot of care is taken while preparing food for offering, strict rules of hygiene and proper psychological set-up being a few of these. In that sense, food for offering is not as per one’s liking, but rather what is specified in scriptures. Agamas (ancient scriptures detailing the rules and methods of temple worship), have specific sections dedicated to the ways of preparing and offering food. To this day, major temples in India, specially South Indian temples follow these rules strictly and allow only food prepared in the temple kitchen as offerings. 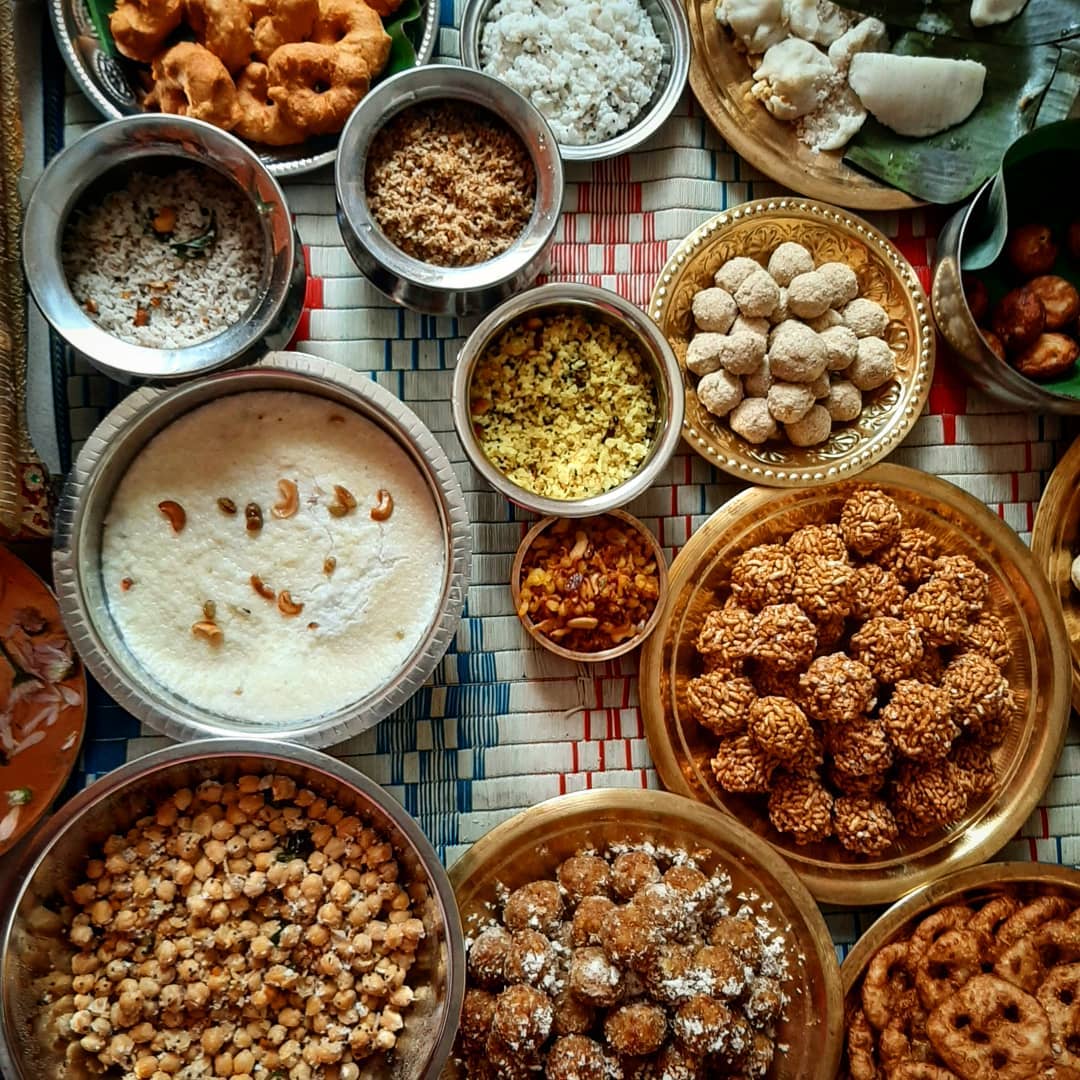 The offering of food should also be an act of devotion, of love and of care. Food is one of the commonest agents of expressing respect and love. To please a loved one, for eg, one would tend to prepare the person’s favourite dish, and all thoughts while preparing the dish would be geared towards the joyful outcome one feels it is going to produce. The same principle underlies preparing food to be offered to deities. Making food for God, makes one humble and joyful and increases one’s sense of generosity towards the world. It brings forth finer qualities. Food prepared mechanically devoid of devotion is unfit for offering.

Having been offered to a deity, the food consequently becomes sacred and is considered to be imbibed or infused with divinity. The food takes another dimension. It takes the form of PRASAADAM or PRASAAD. Hindus believe that the food offered become sanctified and can procure many good things to oneself. Prasaada is not only food, but all things received from God. The supreme consciousness is said to have imbibed itself in the offering. Prasaadam is consumed with utmost respect and shared with everyone. It is even said in some holy texts, that one should consume prasaadam only, implying that all food to be consumed should first be offered as naivedyam. Popularly, but wrongly, the term prasaadam often used to mean offering. But actually Prasaadam is that which is received.

Isn’t it a beautiful process? The offering of food as Naivedyam forces one to bring awareness to the process of cooking right from choosing ingredients, keeping high levels of hygiene, disciplining the mind to be focussed and allowing huge levels of love to flow from ones being. This food consequently becomes the sacrosanct Prasaadam, touched by divinity and procures the highest levels of well being and solace.

Copyright: Devaraj Moothoosamy. Please share this article as much as you can, but in a respectful and ethical manner, by mentioning the source. Usage of photos from this article is strictly prohibited without prior authorisation. Kindly feel free to contact me at any time.

View all posts by Devaraj Moothoosamy